Standing out at an exhibition is as much a matter of preparation as of performance. When designing your exhibition stand, you’ll need to factor in several initial considerations, all of which can have an important impact on the type of graphics you’ll want to use in your display. 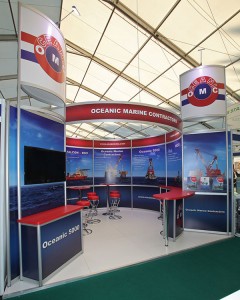 The first of these considerations is the status of your brand. How well-known are you? Not every company has a logo as recognisable as Apple’s, and you’ll want to find the right design balance between showing off your logo and sharing what it represents. Lean too far in one of those directions, and you’ll miss the chance to imprint on people’s minds a connection between who you are and what you do.

If you do need your exhibition display to stand out from the crowd, some knowledge of the surrounding environment can help to give you an edge.   If the exhibition hall and aisles are carpeted in a blue colour, for example, a blue-tone to your exhibition stand or display will blend in and viewers’ wandering eyes may be drawn elsewhere.

Once you’ve worked out how to attract people from a distance, it’s time to think about what you want them to see 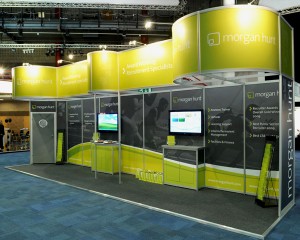 first as they draw closer. Put yourself in your audience’s shoes: if your product is marketed toward children, it works best to place the more colorful parts of your exhibit near the eye level of the younger crowd, and the finer details at a height level the parents will read.

Your competitors may have engaged professional graphic-designers, so if you want to make a greater visual impact than them you’ll have to go one step further. Creative ideas, such as an overarching theme for your visual display (a forest theme, or a bar, or a restaurant counter, or a future city), can feature enough clever and inventive details to delight a visitor, capturing their attention for several minutes to find out what you’re all about.

Understand that in a crowded setting with many visual cues, viewers’ eyes are more likely to rest on images that look familiar at first glance. If your graphics department can create images that resemble well-known designs such as Wi- 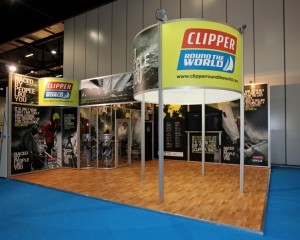 Fi signal icons, internet memes, road signs, and the like and then modify  these images just enough so that they instantly communicate your message, you’re likely to hold people’s focus for longer.

These simple tricks can work wonders on people’s attention without using up too much display space for flashy, over complicated imagery. Don’t let the urge to superficially impress get in the way of informing the audience exactly what it is you are offering. Ideally the two goals of impressing and informing should not be distinct in the layout of your display; they should complement each other.

So, with all that in mind, think of how your exhibition stand could present your company to the world in the best possible light… and let your imagination fly.